Aexus – Helping you to make it in the USA – Chapter 1

Many entrepreneurs dream of entering the US market. There are a number of reasons for this from sound business sense to an expanded market and new opportunities to a potentially lucrative new revenue stream. Also, don’t forget that as a concept at least, the American Dream is alive and well and we have a kind of romantic view of American life from years of TV and movie imports. On top of this of course, we do share some cultural similarities as most of us can speak English and we can certainly find some common ground in a willingness to do business together.

For years, the only place for a tech company to be in the US was Silicon Valley. And, as the birthplace of household names such as Apple, Alphabet (Google’s parent company) and Facebook, that reputation as the world’s biggest tech hub was well deserved. But, that was back in the day and in the here and now, the truth is that there are good and strong tech hubs all overs the country. Silicon Valley is not dead, it’s just not the king anymore. So, with the previous number one taken out of the equation, the question of where to base yourself for your US market entry becomes a little more complicated. Also, it may not be wise to target the whole of the US as you are starting out there. There is the danger that you will spread yourself too thin and it will take you longer to become established. On the other hand, if you were to focus your attentions on one area that is a good fit for your domain, you could benefit from that area’s infrastructure, would be able to connect with a solid base of contacts within your community and can test out the appetite for your product or service without breaking the bank on a nationwide rollout. This not only means that your American market entry would be more cost effective but it would also carry less risk. With that in mind, Aexus has broken the country down into six regions and in this series of articles, we’ll be taking a look at each region in turn. In this particular edition, we’ll be looking at the Southwest and seeing what this territory has to offer current and potential Aexus partners. 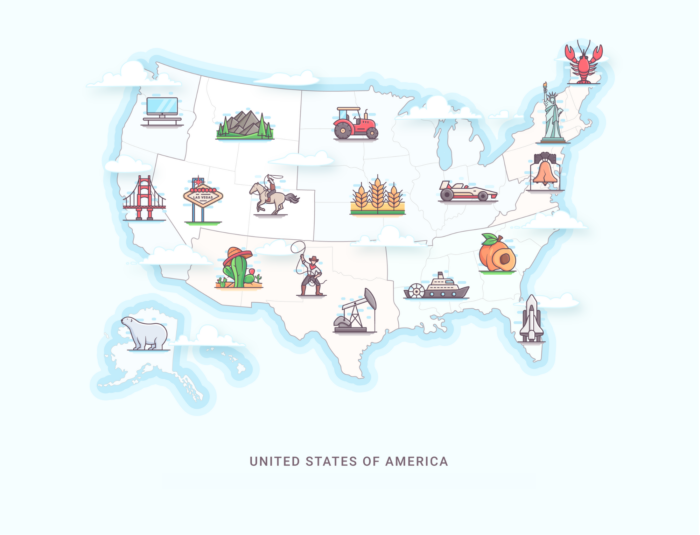 With its highly agreeable year round temperatures, an excellent quality of life and low taxes, the Southwestern region would make an excellent location to start your US operations. You’ll also be in good company as a lot of tech giants moved out of Silicon Valley and to the Southwest to take advantage of the low taxes. The low cost of living is also a draw for top talent and between them, Arizona and Texas employ almost half a million people in the tech industry. More than just jobs though, the tech scene has brought in billions in capital investment, with Arizona alone pulling in just shy of a billion in the first three quarters of 2021, according to PitchBook and the National Venture Capital Association. And it’s not only Arizona and Texas that are worth investigating as New Mexico and Oklahoma are growing as well.

Most tech hubs are not sector specific and each of the four states in the Southwest region could boast about their own health tech, fintech and agri-tech companies but in some cities, one sector occasionally reaches a level of prominence that makes it standout above the rest. For example, Dallas is becoming a telecommunications tech hub.

Telecommunications received an enormous boost from the pandemic and subsequently lockdown. With working from home, people needed an extra capability for video conferencing and sending documents as well as wholly online entertainment. As such, broadband has become even more important than ever and companies are willing to invest in fibre optics and upgrades to stronger networks.

New Mexico has long been a centre for innovation and research with its links to the military and the aerospace industry but as we move on to the new normal, the current growing sector is information technology and technology consulting. This can be evidenced by MTX announcing their plans to establish a southwest, regional office in Albuquerque and creating 250 jobs in the process.

Oklahoma City was recently ranked No.1 out of 42 large metropolitan areas across the US for tech companies and start-ups to expand to, beating Kansas City and Jacksonville into second and third place respectively. The measures it scored most highly for were housing affordability, vibrancy of the market, demographics & labour, tech availability and liveability. The ranking should come as no surprise as Oklahoma is already nicknamed Silicon Prairie.

Phoenix in Arizona is gaining a fantastic reputation for its data centres and this has helped them to attract large numbers of customers and service providers. In fact, Phoenix is now one of the most dynamic data centre growth markets in the US as customers continue to seek alternatives to California due to recent changes in its risk profile.

There is still a long way to go in our series on where would be best to scale to in the US but there are a lot of positives to take from this edition on the Southwest. You may have already had ideas about where you think your particular domain is best suited but with 5 more regions still to look at, you may find something better in a later post. Until then, please feel free to leave your comments below and if you’d like to work with us directly to find your perfect route into the US, get in touch. We’re always more than happy to jump on a call.