Where you go from here is up to you

Aexus is unique among employers. It offers freedom, flexibility and opportunity like no other. We all know from day one that our destiny is very much in our own hands and all it really takes to succeed at Aexus is determination, passion and commitment. If you have those qualities in you and you’re prepared to take ownership of everything you do, there’s no end to how far you can go. Every now and again though, even we get surprised…

This is the story of Suayb. 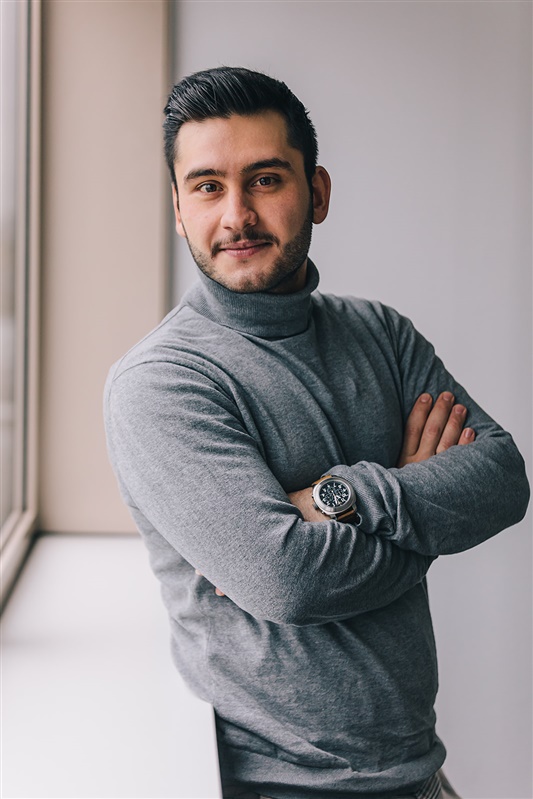 Suayb grew up in Apeldoorn, in the Netherlands and got his first taste of sales at his family’s carpet and flooring store. He grew up in that store, constantly listening to, and presumably learning from the sales conversations he heard his dad have every day with customers and suppliers. Well, this environment must have had some effect on him as his first foray into further education saw him choose to study retail management. However, after realising there was a whole world beyond the retail sphere, Suayb wanted to try his hand at something bigger and knew that business to business was the way forward. That’s how he ended up taking a bachelor’s in International Business and Management. This is where it clicked and things started to fall into place for Suayb. What he liked most about the course was the variety in topics which gave it a much wider scope and appeal. Rather than being laser focussed on one aspect of business, Suayb was able to learn about everything from financial accounting to supply chain and human resources to commercial management. It was just a better fit for his personality, his education and of course, his future.

Suayb already had a grounding and an interest in sales, so it made sense for him to go in that direction. Initially he was an intern in B2B event management at Centre Parcs before moving to a B2C sales job with Nespresso. In fact, Suayb was so successful in this job that he was promoted to a sales coach role, becoming one of only a handful of field coaches in the Netherlands. However, Suayb’s future lay elsewhere, and he was actively looking for a domestic based account manager job and then, Francesca from Aexus came calling…

As he says himself, “At the time, I didn’t really know what an SDR was and I was very apprehensive about the international part as back then, I felt it was a step above the level I was at.”

Starting a new job is daunting at the best of times but starting a job in the middle of a pandemic is something else entirely. But the Aexus management rallied around the new recruits, keeping the remote working fun and accessible and as restrictions ease further, there will be more in-person team meetings and something we like to call a lunch & learn.

In the ensuing months, Suayb not only settled into his role but excelled at it, showcasing his dedication and ambition at all times. He was the one people looked to for leadership, knowledge and confidence. This didn’t go unnoticed and in less than a year since joining, the management team at Aexus gave Suayb his reward, a promotion to be the Team Lead of the SDRaaS label.

He explains it like this, “It’s the Aexus model that has got me to where I am. It’s all about taking ownership. And if you have this mindset, it gives you the stimulation you need to chart your own course.”

Suayb also went on to explain that it wasn’t any special talents or skills he had that got him to the top of his game so quickly. All he did was take the life experience he had, coupled it with the training at Aexus along with his raw ambition and went for it. As he says,

“I was willing to go the extra mile and be proactive rather than reactive.”

It’s all too easy though to sit around and talk about taking ownership and being proactive without ever really explaining what it all means. Suayb doesn’t give a textbook explanation either, but he does illustrate the point perfectly with this snapshot of his work life,

“I wouldn’t always wait for my sales manager to come to intervene with certain conversations I had with my partners, I just took the initiative and did what I thought was right. It’s only thanks to the training I had and the freedom that I get from Aexus that I was able to make that choice.”

That’s what ownership is all about and it is this kind of decision making, work ethic and leadership that has taken Suayb to the top of his game. That’s why he now manages his own team of SDRs and is able to help them become independent and successful. Besides this, he is also responsible for the overall growth, structure, communication and teambuilding of the SDRaaS label.

We’d like to think that Suayb became a product of his environment but in truth, we only gave him the tools he needed to carve his own path. Also, this is not the end of Suayb’s story by any means. In fact, in many ways, it is just the beginning. Where he is now is on the platform he needs to be on for his next leap forward.